83,255 BROWNE members around the world 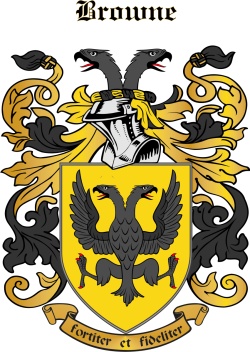 Design your own BROWNE Family Crest

The most well known family of the name in Ireland, was one of the 'Tribes of Galway', a city fraternity of Norman tribes, which included just one Gaelic Irish family.

The Mayo Brownes are probably related to the above, though bearing distinct arms. They became very influential, collecting titles: Barons of Kilmaine, Earls of Altamount and Marquises of Sligo.

The Brownes of Killarney, the Earls of Kenmare, are descended from a later Elizabethan English settler; they again bear distinct arms. An earlier Norman family of Browne in Co Kerry should be given precedence, however; the place name Dunbrowne being named after them.

The Brownes of Camus, Co Limerick were an old Norman family, who distinguished themselves in the military sphere, serving as high ranking soldiers in the armies of Great Britain and Continental Europe (see below).

Browne of Co Wexford, were also of ancient lineage; their lands were forfeited after the 1641 Rising.

However, it should be noted that there is also the Gaelic surname, Mac an Bhreithiún, which is given in English as 'Brown' in 'An Sloinnteoir Gaeilge' (Muiris Ó Droighneáin, 2001 etc) The surname means 'son of the brehon (judge)' .Woulfe in 'Irish Names and Surnames' (1923) says that the name was common in Connacht and west Ulster. There is also a Scottish Gaelic surname with the same derivation, according to Woulfe, which is anglicised as Browne. This is borne out in the '1659 Census' returns for Co Down, below, where the forms are clearly Gaelic.

Two Famous Brownes:
Philippus le Brun, according to legend, came to Ireland in 1170, and, in 1172, was appointed Governor of Wexford. A son, William, settled in Clanmorris, County Kerry, and another, Walter, settled in County Galway.
George (1698-1792) Count von Browne, of the Holy Roman Empire, was a Field Marshall in the Russian Service. He was a Limerick man.

Tell us about any famous BROWNE (or surname variant) you think we should add here. We will get our genealogists to check them out and add them to the list. Thanks!

Join the conversation with the BROWNE tribe

Maybe Colonel Brown died in Havana, Cuba during the siege of the city? I've seen various Butler and Browne in Cadiz, Spain 1700-1740

Hi, i'm looking for an ancestor, Elizabeth or Elizabetha Browne, she married Pierre Grandmaison in Flanders around 1697. Maybe in Bruges. He could be already a member of a calvary regiment. That's all I have so far

An ancestor of mine was Thomas Waldron married to Catherine Jordan. She died in 1817. In Nick Reddan's Newspaper Extracts she is described as " a sister of Major Jordan who died at Jamaica-niece to Colonel Brown who was killed at Havannal and grand-niece to Field-Marshal Brown who died at Vienna." My researches so far indicate that these Browns (Brownes?) are connected to Camus, Co. Limerick and/or Moyne, Co. Galway. A Major Thomas Browne was killed as part of a French/American force at the Siege of Savannah, Georgia, 1779 in the American War of Independence. Is it possible that "Havannal" is a corruption of Savannah? In the 18th century, a Field-Marshal Browne died in the Austrian military service in Vienna. These Brownes would appear to fit the details in Nick Reddan's records. I'm very interested in finding out more about the connection between Catherine Jordan and the Brownes.

My grandfather Robert T Browne was born in Lismore, County Waterford in 1880. I believe the family owned a printing shop and produced a local newspaper. They were Protestants (Church of Ireland) and subsequently moved to Belfast. I briefly visited Lismore as a 9 year old in 1953, and my grandfather's brother was still there. My grandfather joined the RIC, and in 1912 was Winston Churchill's bodyguard during Churchill's infamous visit to Belfast when their car was almost overturned by Protestant rioters. (As a result he had a very low opinion of Churchill). He subsequently joined the RUC and developed the fingerprinting section. He retired in 1938 when he visited the US and was made an honorary sheriff of Chicago. He died in Belfast in 1970. My father Harold George (Buster) Browne was born in Belfast in 1907, and played rugby for Ireland (I don't know what year or what position). He joined the Royal Artillery in 1939, was evacuated from France after Dunkirk and spent the rest of the war in Haifa, Palestine until he was transferred to Tripoli, Libya to become Commissioner of Trade and Supplies for the province of Tripolitania during the British Military Administration until Libya became independent in 1951. He remained in Tripoli until 1960 when he returned to Belfast, and retired there in Millile, County Down. Their house burned down in an electrical storm in 1978, so he with my mother and grandmother Crawford joined us in Durban, South Africa. He died of a heart attack aged 71 in 1979 in Durban. I was born in Belfast in 1942, but grew up in Libya until I was 17 and since 1967 have lived in South Africa. I have written three books, Eye on the Gold having just been published this year. I am considering a fourth book tentatively entitled Eye on the Horizon to include the family's Lismore history (including the Black and Tan operations there), plus Churchill's visit to Belfast in 1912.

I live in Brazil and my Great Grandfather was William Buttler Browne son of Valentine Browne.

Areas of Origin for BROWNE

Write an email address and click 'Invite' to share this page with more members of the BROWNE tribe.

Discover where the BROWNE Family members live around the world

Show off the BROWNE Family Crest…